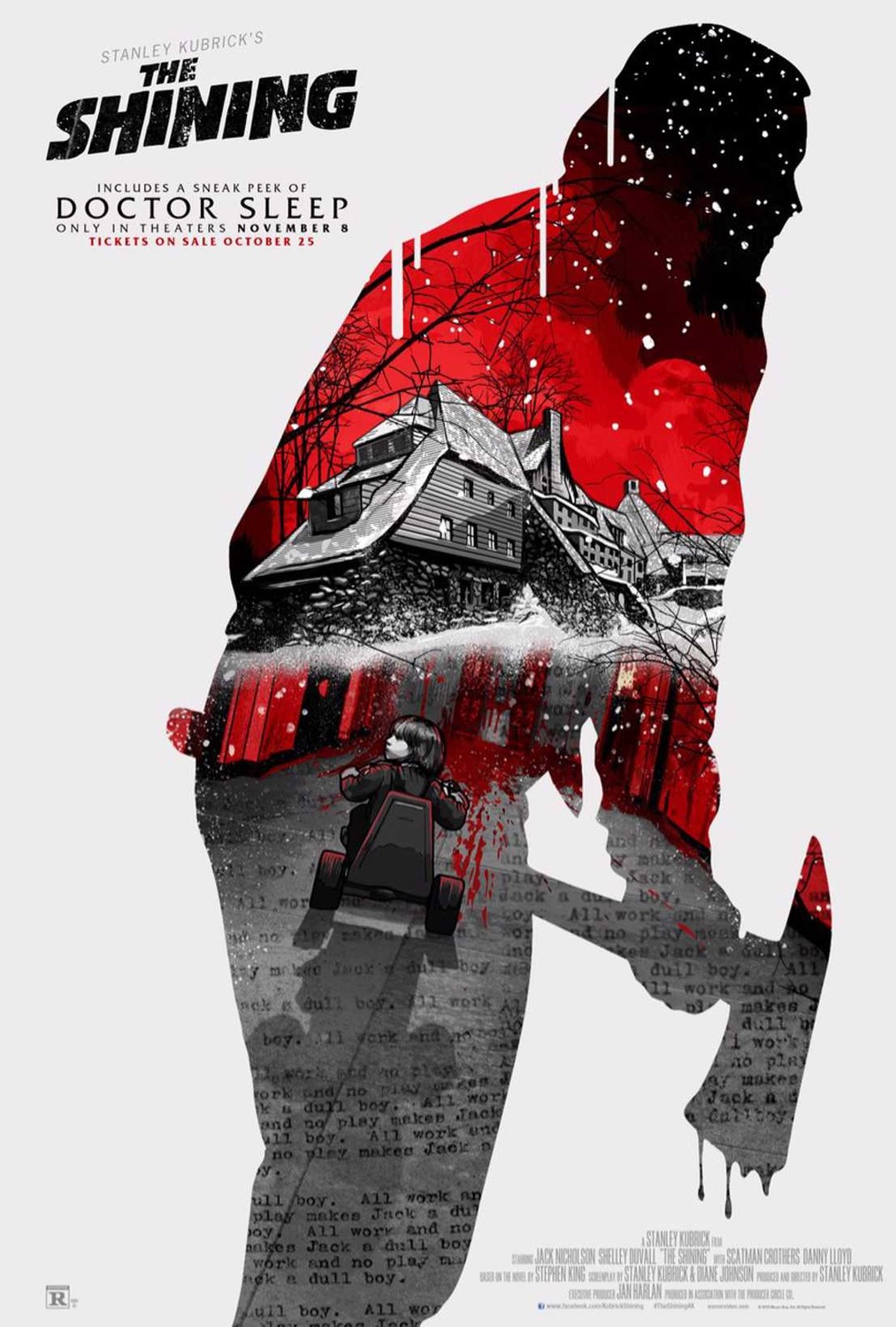 “All work and no play makes Jack a dull boy.”

I wanted to get a review of The Shining posted before I attended a screening to the sequel film Doctor Sleep on November 6th, so stay tuned for my review of that. I got to attend a screening of The Shining on the big screen back in October, and if you ever have the chance to do that, I highly recommend it. See this film on the biggest screen with the best sound you can, or buy the 4K and see EVERY detail.

What is there to say about The Shining that hasn’t already been said by viewers over the last almost 40 years? This film is considered a classic amongst horror fans, it is hated by the creator of it, it is the best Stanley Kubrick movie to some (including myself). It’s difficult to write a review that will do the film justice, but I am willing to try.

The Shining is a horror and drama film about a family that heads to an isolated hotel called The Overlook for the winter where a sinister presence influences the father into violence, while his psychic son sees horrific forebodings from both past and future.

The Shining is directed by Stanley Kubrick. Stanley Kubrick’s filmography consists of Dr. Strangelove or: How I Learned to Stop Worrying and Love The Bomb (1964), 2001: A Space Odyssey (1968), A Clockwork Orange (1971), and Full Metal Jacket (1987). Honestly, what is there to say about Kubrick that hasn’t already been said by people much more well versed than I am? Kubrick was a master filmmaker. He was able to get these ridiculous shots in his movies that after taking some film courses in university, that I ask myself – how did he manage to film this? what kind of film sorcery is this? and the answer to those questions is Kubrick for lack of a better word was a wizard. The scene that I always am fascinated with is the scene where Danny is riding his 3-Wheel through the halls of The Overlook. Theres no cuts, Danny is peddling hard, and yet the camera is able to keep the same distance back, yet keep up with the young lad on this tricycle. I still don’t know how they were able to film it, but thats the magic of a Kubrick film, and film in general I suppose: the impossible becomes possible. You’d be hard pressed to find another Kubrickian film maker that has as much style as he did.

Jack Nicholson’s filmography consists of One Flew Over The Cuckoo’s Nest (1975), Batman (1989), A Few Good Men (1992), Mars Attacks! (1996), The Pledge (2001), Something’s Gotta Give (2003), and The Departed (2006). Nicholson is a great actor, who can really do any type of role. I think back in the day he took more chances with his career, but I’ve always enjoyed watching his films. The slow descent into madness and the transformation he goes through in this movie is quite interesting and a real testament to his acting ability. Not many actors could pull off what he did, and with such style. Even in subtle ways, with how Nicholson could manipulate his face is creepy, and you could see the evil in his eyes.

Shelley Duvall’s filmography consists of Annie Hall (1977) and Time Bandits (1981). I don’t remember Duvall’s role in either one of these movies, but I remember being absolutely hooked to the screen when I watched her in this. She is the sensible actor, very well kept and very deliberate in her acting. She had a great neutral acting ability when she was levelling out the crazy scenes with Nicholson.

Danny Lloyd’s filmography only consists of The Shining. For a child actor, Lloyd is very good. Especially when this was his first and only film, I’m actually surprised he didn’t do more films, I thought he was great in this movie.

Scatman Crothers’ filmography consists of One Flew Over The Cuckoo’s Nest (1975), Transformers {TV Series} (1984-1987), and The Transformers: The Movie (1986). I really like the character of Hallorann, he was another “cool-er” character like Wendy was when the insanity and eeriness took off with Jack.

The Overlook Hotel, I feel is more of a character in The Shining than just a location. It is a giant, twisted, isolated and eerie place that has a lot of history. It has its own maze, that is almost like a symbol for the human mind or Jack’s descent into madness, lots of twist and turns and its very claustrophobic. For such a giant hotel, it sure does feel claustrophobic in its setting. Theres a couple of wider shots like the area where Jack is writing that gives the audience room to breathe a bit, but there is a lot of close ups where you see everything and you just feel like you’re encroaching on the scene. Also the way that the camera moves and such, as an audience member you feel like you’re in the Overlook Hotel and you’re not supposed to be there. Shit is about to go down and you feel like you need to run away, but you can’t look away, and you’re stuck in the claustrophobic madness.

The music of The Shining deserves to be talked about, as I feel like its absolutely instrumental to the feel of the movie. There’s certain songs in this movie that get stuck in your head like ‘Midnight, The Stars and You’ by Al Bowlly, Ray Noble and His Orchestra (Link to youtube), that immediately take you back to The Overlook Hotel. You will think about a very certain part in the movie. Everything musically in this film is deliberate, as Kubrick was in his filmmaking. There is no wasted space in a Kubrick film, everything presented on screen is there for a reason.

A little backstory to my history with The Shining (1980). The first time I watched this movie, I really did not like it, I did not understand the hype that surrounded the film and what everyone who sung its praises were talking about when they said how great this movie is. So much so I thought I didn’t see the right film at the time. But theres something about The Shining that infects your brain and makes you want to come back for another viewing. I started thinking about it more and more, and I remember watching it again and just being incredibly hooked by the atmosphere and the setting, that it completely changed my outlook on the movie itself. Now flash forward almost 12 years or so, and it is one of my favourite horror films that I will try to watch at least once or twice a year, usually around the first snowfall of the year, just to get myself into the mood for winter *shivers*.

The Shining is a movie that rewards its viewers with repeat viewings. You may notice something different each time you watch it, you may see a new detail, or you just want to get lost in his foreboding atmosphere. For horror fans, I’m not quite sure if it gets better than The Shining for atmosphere.

I give The Shining a 5/5. There is something about this film that keeps bringing me back to it, even after I really did not like it the first time. I’m so glad that I decided to watch this film again.

Until Next Time!
-Andrew