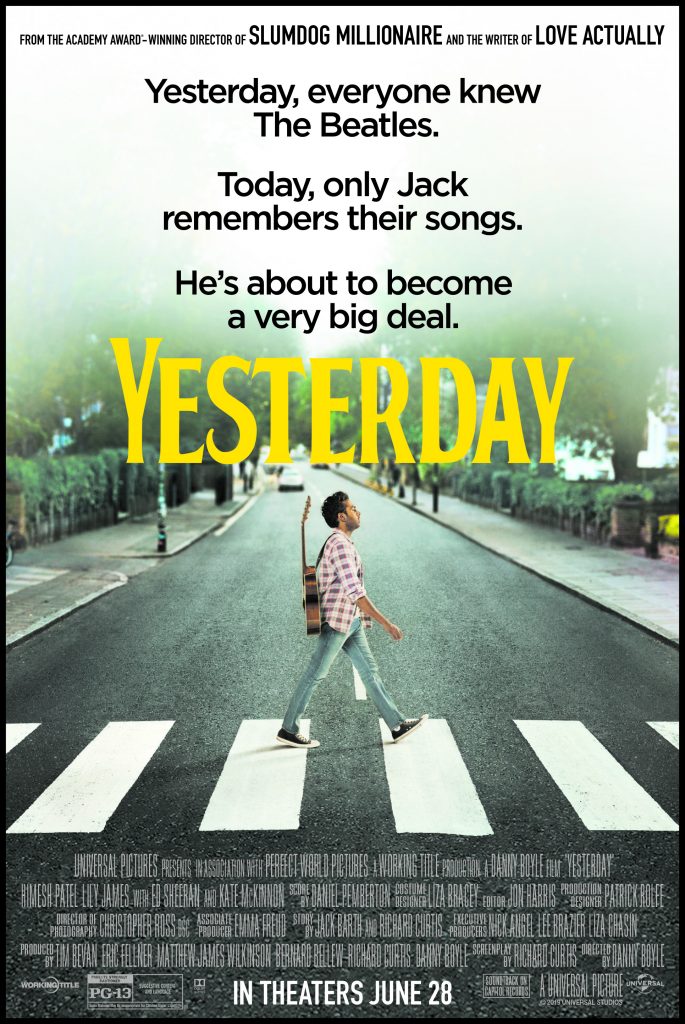 “I didn’t write it. Paul McCartney wrote it, The Beatles wrote it.”

Everybody knows who the Beatles are. You’ve heard their songs, you’ve heard their names. You probably know some of their history, without even thinking that you do. So to raise the question, what would happen if The Beatles never existed was an interesting premise for a movie for me. I was instantly grabbed by the trailer for Yesterday (2019) because The Beatles are one of the most influential bands to ever grace the Earth, and their influence is still being felt today.

Yesterday (2019) is a Comedy, Fantasy, Music, Musical and Romance movie about a struggling musician that realizes he is the only person on Earth who can remember The Beatles after waking up in an alternative timeline where they never existed.

Yesterday is directed by Danny Boyle. Danny Boyle’s filmography consists of Trainspotting (1996), 28 Days Later… (2002), Sunshine (2007), Slumdog Millionaire (2008), 127 Hours (2010), and Steve Jobs (2015). If theres is one thing that is absolutely certain about Danny Boyle’s filmography is that he has never made the same movie twice. He has dabbled in multiple genres of films, and although I haven’t seen every one of his films…yet… I have enjoyed each one for its uniqueness and Boyle’s courage to not just make the same film over and over. Yesterday (2019) I felt was no different. He did a great job directing this film, it was a very unique premise, that I feel an lesser experienced filmmaker would have fumbled.

Yesterday was written by Jack Barth and Richard Curtis. I am not familiar with any other thing that Jack Barth has written. Richard Curtis on the other hand, his filmography consists of Mr. Bean {TV Series} (1990-1995), Bean (1997), Notting Hill (1999), Bridget Jone’s Diary (2001), Love Actually (2003), About Time (2013), and Mamma Mia! Here We Go Again (2018). I actually have really enjoyed the films that Curtis has written. He has different ideas that are super interesting to me. I especially enjoyed About Time (2013), I highly recommend that film if you haven’t seen it. It is a lovely film. But I thought Yesterday, especially in the uniqueness was a really well written film, with a nice story. I thought the script was funny and well written.

Himesh Patel’s filmography consists of nothing I have ever seen before. I thought Patel’s performance in this movie was incredible. Easily the best performance of the film, but he was charming, funny and boy could he ever sing. I was really quite impressed by his acting, and I am surprised I haven’t seen him in anything else, but I hope to see him in more things in the future.

Lily James’ filmography consists of Baby Driver (2017), Darkest Hour (2017), Sorry To Bother You (2018), and Mamma Mia! Here We Go Again (2018). Lily James is a wonderful actor, I thought her work in Mamma Mia! Here We Go Again (2018) was excellent. It was nice to see her in a little bit of a different role too, she still sang a bit which was lovely, but she was more of a supporting role, but I felt like she really graced the screen when she was on camera.

Joel Fry’s filmography consists of Paddington 2 (2017). Fry was the comic relief in this movie, and I thought he did a great job in this role. I enjoyed how he was able to go from being serious in one minute to be silly and playful the next.

My only real issues with Yesterday (2019) was the pacing. I felt it dragged a bit in places, but other than that, I really can’t think of anything else.

The soundtrack was lovely, the story was fun, the characters were interesting and the story to me was super enthralling and I was hooked from the first trailer.