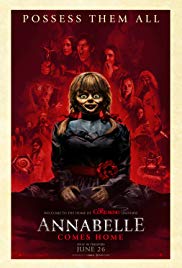 MPAA: R (horror violence and terror – definitely 14A in Canada)

The Conjuring universe has been going on since 2013. In the span of 6 years we have seen 7 movies – one sequel to The Conjuring (2013), one spin off of The Nun (2018), The Curse Of La Llorona (2019) and a total of 3 Annabelle movies, Annabelle (2014), Annabelle: Creation (2017) and now we have the newest film in the Conjuring and Annabelle universe – Annabelle Comes Home (2019). I think this universe so far has had a lot more misses than hits. The Conjuring Movies themselves are great and Annabelle Creation I thought was what the original Annabelle film should have been. I didn’t see The Nun or La Llorona, because I did not feel like going to see them in theatres. So I feel like I have a pretty good handle on this series so far, but does Annabelle Comes Home spook ya or should you just stay home? Lets find out.

Annabelle Comes Home is a Horror, Mystery, Thriller film about a babysitter and her friend are taking care of Ed and Lorraine Warren’s daughter, when they unknowingly awaken an evil spirit trapped in a doll.

Annabelle Comes Home is directed by Gary Dauberman, in his directorial debut. He’s been in the industry for a while as a writer, but this was his first stab at directing. I thought he did a pretty good job and this is a good stepping stone into a successful directing career. While I had some issues with it, I didn’t see it as all bad.

The script was written by Gary Dauberman and James Wan. Gary Dauberman’s writing filmography consists of Annabelle (2014), Annabelle: Creation (2017), and It (2017). James Wan is a horror household name now, and has made himself that way by creating excellent horror films, but his writing filmography consists of Saw (2004), Saw III (2006), Dead Silence (2007), Saw {Video Game} (2009), Insidious: Chapter 2 (2013), The Conjuring 2 (2016), and Aquaman (2018). I feel like the script was pretty good, I felt like the characters were written well, but there was too much filler which I’ll get into in my problems with the film.

McKenna Grace’s filmography consists of Ready Player One (2018), The Haunting Of Hill House {TV Series} (2018), Fuller House {TV Series} (2016-2018), and Captain Marvel (2019). I think that Mckenna Grace did a great job in this movie, she was fun and believable. I didn’t actually recognize her from Fuller House, but its cool to see she is already so young and already taking different roles. I definitely need to sit down and watching The Haunting Of Hill House, its been on my watch list forever.

Madison Isema’s filmography consists of Jumanji: Welcome to the Jungle (2017), and Goosebumps 2: Haunted Halloween (2018). I joked to a friend of mine that I went to this screening with that this movie felt like a Goosebumps episode, and when I got home I googled this girls name and low and behold she was in the recent Goosebumps movie I watched. I thought Isema did a great job in this movie and I actually found myself caring about her relationship with McKenna’s character, they seemed like they had great chemistry.

Katie Sarife’s filmography consists of nothing I have seen before. There always is that one person in horror movies that makes the really dumb decisions, unfortunately for Katie she was that character. I found myself shaking my head a lot of the time at the stuff she was doing, but I think she played this character well.

My issues with this film is that there were too many jump scares. There was no tension, you just had back-to-back-to-back jump scares, which was fine for a little bit, but I found it got a little monotonous and boring after a little while. I would sit there and be like “okay here comes another jump scare.” and it just felt very formulaic in that way.

I also thought that there wasn’t too much of a difference between this movie and your typical episode of Goosebumps from back in the day. They had all these different elements of the Warrens past, and each artifact just felt like it was straight out of a Goosebumps book, they didn’t really go into the back story much on any of them, there were some artifacts and their backgrounds I wanted to know more about, but I shouldn’t worry too much, I don’t think they’re going to slow down the Conjuring Universe of films anytime soon.

I also was slightly disappointed that there wasn’t more Ed and Lorraine Warren in it. Which is just my own personal taste, but I won’t hold it against the movie for that. They wanted to tell the story focusing on the daughter and the power this doll had, not the way in which these paranormal investigators combatted it.

Overall I was left slightly disappointed in Annabelle Comes Home. I thought we had another hit on our hands after I was pleasantly surprised by Annabelle: Creation (2017), and after the abysmal Annabelle (2014). But it was just a bit too formulaic in my book, still entertaining in places. But not enough tension and an over reliance of jump scares, made this horror fan check out early.

I give Annabelle Comes Home a 3/5.

Note: If you want to read my thoughts and review of the last Annabelle Movie, the link is below.