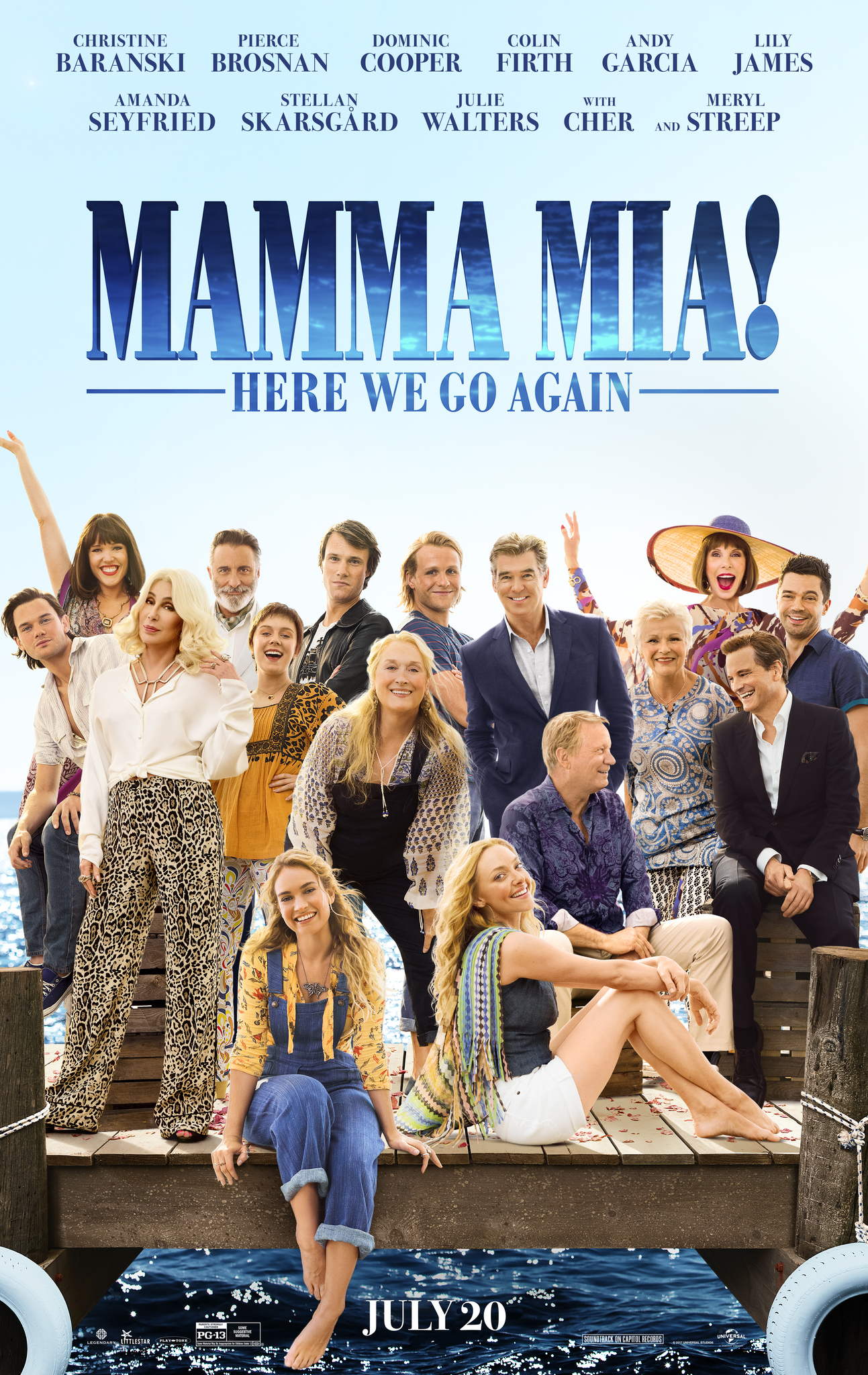 I have not written a review in a long time, between a mix of being busy with a job that I ended up leaving and not going to many films in the theatre lately, this blog has taken a backseat. My goal is to try to get a slight comeback, and hopefully get a least a review done each week.

Mamma Mia! originally came out in 2008, I remember going to see it in the theatre twice. Once with my parents as they really wanted to see it and once with my Aunt before she passed away. The original film was a lot of fun, but I had some certain issues with the film, but still enjoyed it. The sequel Mamma Mia! Here We Go Again, fixed a lot of the issues I had with the original, and the result was a stronger film that had you laughing one minute, tapping your foot another minute and then wiping a tear from you eye the next.

Mamma Mia! Here We Go Again is a Comedy, Musical film that takes 5 years after the events of the original film, Sophie finds her self to be more like her mother than she ever realized.

The film was written and directed by Ol Parker. I am very unfamiliar with Parker’s work, however he did write the screenplay for The Best Exotic Marigold Hotel (2011) and The Second Best Exotic Marigold Hotel (2015), which are two films I have on my excruciatingly long watch list. I was quite impressed with Parker’s work on this film, he was able to add a lot more context to the songs themselves and the times in which there was singing felt like there was more meaning and impact behind then, then just having them strung out wherever there seemed to be downtime in the film or within the story. It just felt more cohesive, and it was just more fun.

The story was written by Richard Curtis, Catherine Johnson and Ol Parker. Richard Curtis’ writing filmography consists of Mr. Bean {TV Series} (1990-1995), Bean: The Movie (1997), Notting Hill (1999), Bridget Jone’s Diary (2001), Love Actually (2003), and About Time (2013). Catherine Johnson’s Writing filmography consists of Mamma Mia! (2008). I thought this movie was well written. They were able to really develop the original concept for the film (and the play) and add too it in just the right ways that it feels different, but builds on the concept of the original (like any good sequel should do).

I cut back the actors filmography overview I originally do, because if I were to talk about everyone in this film and their filmographies, we would be here a while. I thought all the acting in this movie was good, it was a fun movie that didn’t involve a lot of brain power, it was nice to just sit back and enjoy the story.

This movie wasn’t perfect, I had some issues with the pacing. But it can be overlooked by the amount of fun and heart this movie has.

Also, I wish that the “big” grandmother cameo and the song that the grandmother sang was kept secret, I think it would have been a lot more fun if it was a secret, but the trailers gave her away.

If you enjoyed the original film, go out and see this one, I guess you probably already have if you’re a fan considering this review is super late. If you didn’t like the original, this film wont change your mind about it. But if you’re looking for a fun time, theres a lot worse things you could waste almost 2 hours on.