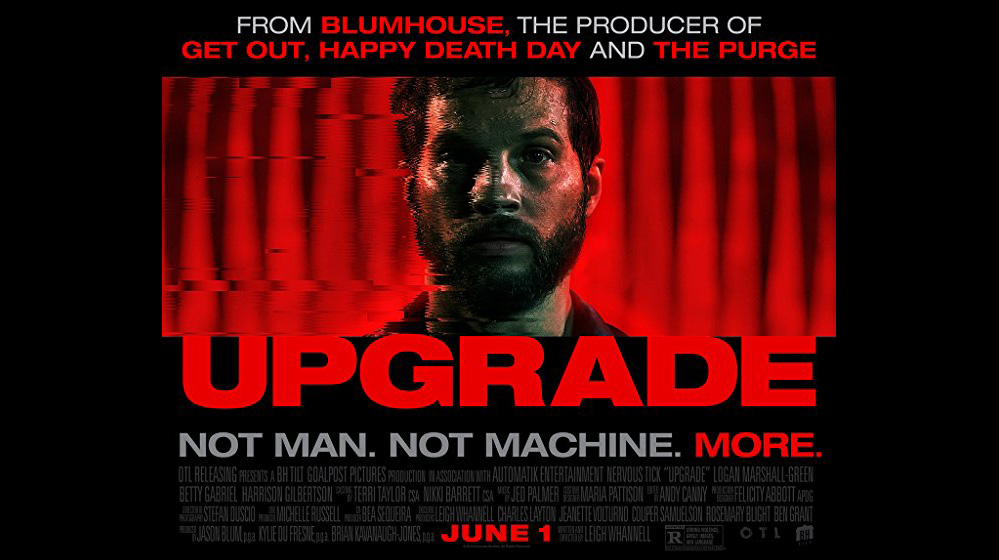 I did not know a lot about this movie before it came out, I did not even remember who was directing it or writing it at the time, but once I found out who the director and writer was I was totally in. I didn’t even have to watch the trailer, I went in completely blind and it made for a really great time at the theatre.

Upgrade is a Action, Horror, Sci-Fi film set in the near-future. Technology controls nearly every aspect of life. But when Grey, a self-identified technophobe, has his world turned upside down, his only hope for revenge is an experimental computer chip implant called STEM.

Upgrade is written and directed by Leigh Whannell. Leigh Whannell is best known for his collaborations with James Wan. He wrote Saw (2004), Saw II (2005), Saw III (2006), Dead Silence (2007), Insidious (2010), Insidious: Chapter 2 (2013), and Insidious: Chapter 3 (2015) {This was also his directorial debut}. It is impressive to me that this is only Whannell’s second film as it knows exactly what it wants to be and exactly what its trying to be and succeeds in that aspect, 100%. Upgrade is a highly original film, unlike anything I have seen lately. The way its written, the way its shot and directed all make for this dumb, fun, and full of action movie in the best kind of ways. There is some weird camera techniques and camera cuts that I was super impressed by and that I have not seen in any other films. If Leigh Whannell keeps making movies, I’ll keep watching them.

Logan Marshall-Green’s filmography consists of 24 {TV Series} (2005), Across The Universe (2007), Brooklyn’s Finest (2009), Prometheus (2012), The Invitation (2015), Snowden (2016), and Spider-Man: Homecoming (2017). The more I see of Logan Marshall-Green, the more I take notice of his acting skills. He is extremely good at what he does and is severely underrated. I have enjoyed all the roles I have seen him portray, but Upgrade I thought really brought up all the different dimensions of his acting skill.

Betty Gabriel’s filmography consists of The Purge: Election Year (2016), and Get Out (2017). I am not too familiar with Gabriel’s acting, but she is definitely talented, I thought her role in this movie was good.

Harrison Gilbertson’s filmography consists of Need For Speed (2014). I honestly think that this actor reminds me completely of another actor, but I cannot for the life of me put my finger on that person. However, I thought he did a great job in this role. Much different than his small role in Need For Speed (2014).

I thought the technology utilized in this movie was super cool. There were a lot of unique pieces of technology (that I am not sure if we’re too far off of some of them) they utilized the self-driving car and robots to make food. It was a super cool movie to watch in that aspect.

As I said earlier, the camera work in this movie I thought was really cool and well done. There was a transitional scene where the camera flipped upside down twice and we ended up in the next scene, I thought it was a really cool transition, that you really do not see much in film these days.

I had a little gripe with the pacing of this movie in some places, where I felt like a couple parts could have been trimmed, but I think thats just personal taste.

This is a short review, but it gives you more time to head out and see this original movie!

I had a lot of fun watching this movie and it was a breath of fresh air to watch something unique and original in the age of watching sequels and reboots.